When Anilee B. from  Decatur, Alabama realized her calico cat Malala was missing, she immediately called AKC Reunite to report her as lost.

“She always sits on the counter and watches me do my makeup… When she wasn’t in there, something didn’t feel right and we started looking around the house for her but couldn’t find her. This is when I called AKC to report her as missing.”

Months went by and Anilee was sure she was not going to see her beloved cat until she received a phone call from a local animal shelter. “The local animal shelter called me and said they had found her and needed me to get up there right away because she was injured. I was ecstatic that they found her alive, but I was terrified of seeing her hurt and hoping it wasn’t as bad as they said it was. The microchip saved her life!”

After being lost for two long months, Malala was finally back safe at home with her family and has not left her owner’s side. “Malala and I have a bond that I never had with any other animal,” says Anilee, “Malala became my therapy cat. This was part of the reason she was microchipped, life happens and animals can get out and I needed to know I would find my therapy cat and my best friend again.”

“The only reason she’s alive today is because of AKC Reunite I cannot thank them enough. When I called to report her missing the lady was really sweet and understanding. I am thankful that two years ago when I was getting her spayed that the vet also suggested microchipping her.”

Best dog pals, Niko and Bailey, escaped through an unlocked gate after a mid-day check-in by their owner, Kay! Thankfully, with a personalized AKC Reunite collar tag and our 24/7 pet recovery service, the dynamic duo was reunited in no time.

Only eight-months old, Mack the Domestic Short-Hair, is a bold and curious cat eager to explore. Good thing his microchip is enrolled him with AKC Reunite.

Ready to break free of quarantine, Sadie the six-year-old pup decided to go exploring. With her AKC Reunite collar tag and unique microchip ID number, she was home in less than two hours! 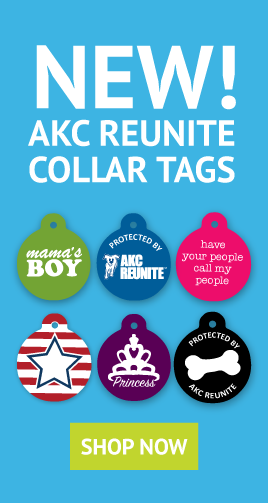